This review was written for and appears on Punch Drunk Movies. Check out the site when you have a chance.

“The Big Sick” is being sold as a romantic-comedy. That description is only half-true. If you go in expecting Cary Grant and Irene Dunne (if you’re old school, like me) or Tom Hanks and Meg Ryan (if you’re newer school, like, err, me also) you might leave the theater disappointed. But if you know that it’s more of a comedy-drama, you’ll probably end up enjoying it.

Situation-heavy, instead of plot-heavy, the movie details the real-life relationship between screenplay co-writers Emily V. Gordon and Kumail Nanjiani (who also stars as himself). Kumail is Pakistani born and American raised. He’s also a comedian, and one night, during his set, he makes a connection with Emily (Zoe Kazan), who is in the audience. They hit it off, a relationship ensues, but Kumail’s strict Muslim parents (Zenobia Schroff, Anupam Kher) are busy trying to set up his arranged marriage.

“The Big Sick” fulfills its comedy label. It is funny. Proof? Dan Hudak (creator/managing editor of this site) was sitting behind me during the screening, and for the first 45 minutes I heard nothing but laughter from his row.

The movie is produced by Judd Apatow (director of “The 40-Year-Old Virgin” and “Knocked Up”) and it bears his hallmarks with an emphasis on conversational humor and a leisurely pace. Apatow’s films tend to be too leisurely, though, often suffering from an abundance of slack scenes uncertain where they want to take the movie. At a 124 minutes “The Big Sick” appears to suffer from this too, but there is a crucial difference. “Sick” uses its time wisely.

Ostensibly about Kumail and Emily’s relationship, the movie is quite a bit more than that. In a way, it reminds me of “Toni Erdmann,” the fantastic German “comedy” that used its extensive runtime to explore gender roles, culture clashes, etc. along with its central father/daughter relationship. “The Big Sick” takes time to explore Kumail’s identity as a Pakistani/American and the tensions that arise from his Western-leaning ideals vs. those of his Muslim family. And it explores these aspects in a humane and, yes, often funny way.

Poor Emily gets the short-shrift because of this, and we don’t get to learn as much about her. This is clearly Kumail’s movie. It’s told from his perspective. He’s the one we follow home.

I Initially thought the film was way too long. As the movie stewed in my mind, though, I started to rethink that stance. Was it really too long? Why did I think it was? 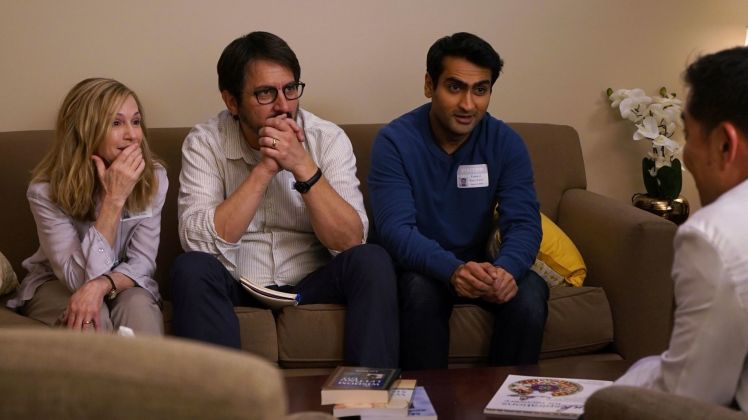 I’m not a fan of spoilers, but I am going to reveal a big part of the movie now because I think it will make enjoying the film easier. Less than 45 minutes in, I noticed the audience’s laughter began easing up. That’s because the movie takes a pretty heavy detour. Kumail and Emily break up, and soon after, Emily falls ill and into a coma. The movie then shifts focus to Kumail trying to take care of his ex-girlfriend, working through his feelings for her, and building a relationship with Emily’s parents (played wonderfully by both Holly Hunter and Ray Romano), who have marital troubles of their own and don’t take kindly to Kumail, the ex-boyfriend.

I thought that this portion of the movie was going to be a short-ish detour, a writer’s convenience to bring the two characters back together. Turns out, the detour is the meat of the movie; that’s what it’s actually about. I realized this way too late and spent most of the running time impatiently waiting for the movie to get back on track, not realizing it was on track the whole time.

My anxieties over the narrative not bending to my will almost made me miss how well written the movie was, navigating family and relationship dynamics in satisfying ways without stooping to oversimplification, and how nicely it balanced both comedy and drama. No, we may not have been laughing as heartily as we were at the beginning, but there were still a lot of jokes that landed in the middle of the drama, which never got too heavy.

On my drive home, though, I was still in “too long” mode, and I started to accuse the movie of a bait and switch. It presents itself as a romantic comedy, I thought, and then doesn’t commit to it. Then my brain finally engaged. “Wait a minute,” he said, “look at the title again.” Yup, I finally got it. Took long enough. “The Big Sick” isn’t just an analogy for love; it also, slyly, reveals the actual plot right there in the title.

No, “The Big Sick” is not a straightforward romantic-comedy. It has elements of one, but it’s more than that. So when it detours, give in and follow where it’s going. You’ll be rewarded with a solid, humorous, and thoughtful movie.