The Report’s subject matter is important. Of course, that doesn’t mean the movie’s automatically good. That important subject matter has to be presented in a coherent and entertaining manner. Writer and director Scott Z. Burns–who earned his bonafides with screenplays for Steven Soderberg movies like Contagion and Side Effects (a personal fave)–does his best to turn this story of government investigation into a satisfying thriller, and, darn it, he just about succeeds. But a certain something, a certain spark, is still missing. 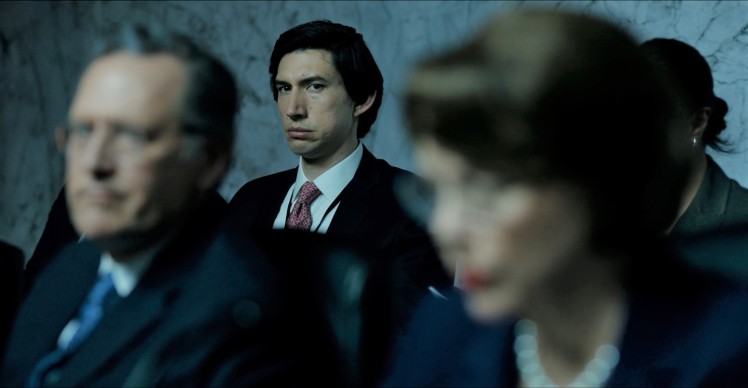 Adam Driver stars in this fact-based thriller as Daniel J. Jones, a U.S. Senate investigator tasked by Senator Dianne Feinstein (Annette Bening) to launch an investigation into the C.I.A.’s interrogation techniques used in the aftermath of the September 11th attacks. As Jones digs deeper into the facts, a picture becomes clear of what was done to detainees, how and why the C.I.A. decided to use what they called enhanced interrogation techniques, which is nothing more than a fancy name for torture, and who approved its use. With his continuing investigation, a battle ensues for Jones to have his findings released as he navigates a labyrinth of red tape and government pushback from high up officials who do not want the truth to come out.

The Report is a lean movie. So lean, Adam Driver’s Jones isn’t afforded much depth. But he’s the lead, the audience surrogate, in about 90% of the movie, and all we get to know about him is that he’s obsessive and will doggedly pursue the truth. He mentions a girlfriend that left him because of his preoccupation with the job, but we never meet her or anybody outside of his work. Still, Driver has presence and his odd, slightly stilted delivery is captivating even without much underneath.

This two-dimensionality appears to be a calculated choice. Dan is blank filled up by his work. For the audience, he’s a cipher, a nonentity meant to take in the information he finds in his investigation and regurgitate it palatably for the audience to understand. There’s positives and negatives to this. The negative is that the movie loses personality because of Dan’s lack of one. On the other hand, the fact that we never see his outside life means that we’re spared rote scenes of conflict, like when the girlfriend or wife character, usually played by a good actress wasted in a small role, berates the protagonist for his obsession and lack of interest in their relationship.

The closest analog I have for The Report is All the President’s Men. Both movies feature an investigation into the wrongdoings of people in high political power, and both feature very little handholding. Follow or get lost they seem to say. But President’s Men has more personality. With Robert Redford and Dustin Hoffman in the main roles, and great character actors like Jason Robards backing them up, that’s bound to happen. That movie also allowed its characters to be witty, to break the tension a bit. Good drama always knows when to ease back and let the audience breathe. There is almost no humor in The Report, which makes sense considering the subject matter, but it just barrels on through, as somber as its main character.

But you have to admire the film’s myopic stance. It has one thing on its mind and sticks to presenting it. And you know what, it’s so well constructed, everything so well laid out and explained (if you pay attention) that it remains riveting and engaging for the entire slightly sub-two-hour runtime, frills or no. This is especially impressive when you consider that Jones’ investigation mostly consists of looking up files in the CIA database.

Still, there is something missing here. The vehemence with which the movie, like Dan Jones, pursues the truth and lays it out to the audience proves that it’s not lacking passion. But it’s lacking that special something that elevates it from you should see this to you must see this. The last lines are a plain “You did well,” and a “thank you” in return. It’s a perfect way to end this movie, and perfect example of what kind of movie this is: straightforward, almost to a fault.