Netflix’s Extraction is a de facto Marvel reunion, though a particularly gritty and violent one. It’s produced by Anthony and Joe Russo, co-directors of such Marvel fare as Captain America: The Winter Soldier all the way to last year’s box-office behemoth Avengers: Endgame. Written by Joe, the movie also stars Thor himself, Chris Hemsworth, and is the directorial debut of Sam Hargrave, stunt coordinator and assistant director of those Russo movies among many others (Atomic Blonde, Deadpool 2, etc.). Is Extraction worthy of these Avengers (re)assembled?  Though somewhat generic as its title, this meat and potatoes genre picture entertains with its commitment to its hard-hitting action scenes and is slightly elevated by interesting details snuck into this oft-trod tale. 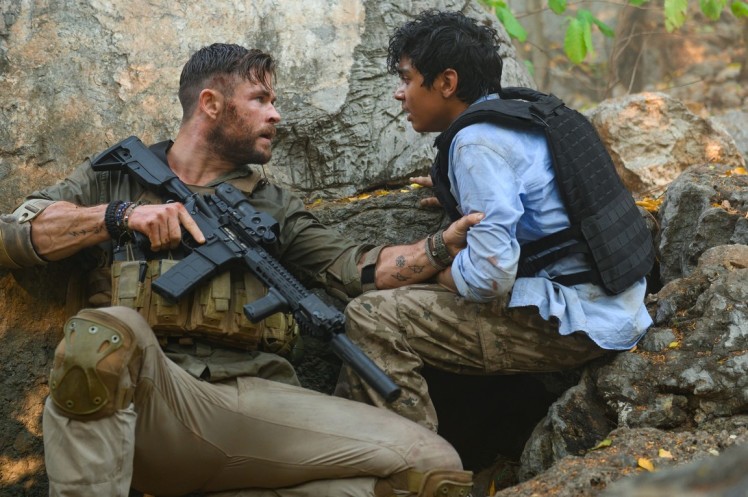 Hemsworth, sporting his native Australian accent, stars as Tyler Rake, one of those mercenaries with a death wish who’s the Best at What He Does™ that we always see in movies of this ilk. The most interesting thing about him is his ridiculous name, which is made more ludicrous when he violently dispatches two bad guys with… [deep breath] … his namesake garden tool.

When, Ovi, the young son of India’s biggest drug lord is kidnapped by the biggest drug lord of Bangladesh (I’m actually paraphrasing the movie here), Tyler is called into action, descends into Dhaka, depicted here as a yellow-filtered-to-death slum, and rakes the bad guys over the coals (I’m sorry. I had to). Of course, the duo’s escape from the Bangladeshian capital is complicated by the country’s police and elite task force all under the control of that local crime lord, Amir Asif (Priyanshu Painyuli), and a mysterious violent figure whose reveal actually surprised me and added a nice wrinkle to the proceedings. I don’t know if that’s because the movie’s good or my critical faculties are bad.

With a plot this simple, there’s only one reason for the movie to exist: the action. Thankfully, the film does well in that department. Basically, it’s John Wick meets The Raid with lots of people getting shot up-close à la Wick and hard-hitting fisticuffs filmed in a frantic but controlled style like the Raid films, though it must be said, without that Indonesian franchise’s elegantly brutal martial artistry.

The movie’s centerpiece is a “oner,” a series of long takes stitched together to look like one continuous shot. Yeah, the oner is in danger of being overused, but I’m still a sucker for it (see my review for 1917), and that’s even when the seams show, as they do here with obvious edits that are not-so-well hidden. But the 11-minute action sequence still has great moments as the camera glides behind a car racing down the dirt streets and then seamlessly moves inside so we can see Hemsworth driving or a continuous shot following the main characters as they jump from one rooftop to the next. Some of it is undercut by dodgy CGI, which admittedly plagues much of the movie, but for the most part, it works.

In movies with plots as generic as this, I look for small details, little bits that help distinguish the film from the generic cesspool from which it sprang. Extraction has enough such bits to raise its enjoyment level. It may be something as simple as the movie properly showcasing silenced weapons as still being loud, or little details like brawls in the middle of packed streets being interrupted by oblivious scooter drivers. It’s also interesting that Rake wears elbow pads, making him seem just a little more human. Hemsworth, indeed, is slighter of frame here than in his Thor movies, which means he’s just an Adonis rather than a Greek god this time around, though the pain and punishment he receives and brushes off are still commensurate to that of a superhero.

I know what you’re thinking. Elbow pads make the movie good? Well, no, but they’re indicative of a film not just coasting on autopilot. Hargrave, Russo, et al. seem aware of the limitations of the material and sneak in some nice bits. They make sure that Ovi (Rudhraksh Jaiswal) is properly terrified but not an annoying brat. They give their lone female character, the spectacularly cool Golshifteh Farahani as a fellow mercenary, unexpected action moments to shine. And they add some welcome shading to the initially villainous role of one character.

Maybe it’s just the quarantine talking, and I’m just hard up for entertainment, but I enjoyed Extraction for what it was and for being just a little more than that. I say give it a shot, it’s not like we anything else to do right now.